Whoa! Who's That Chick?!

Whew! It's been a bit of a whirlwind since I posted that I wouldn't be blogging for awhile.

After the break-in it was rather jarring and hard to calm down and be excited about anything.  But it was really easy to be upset about a lot of things. So here is a re-cap of the good and the bad things that happened since I last blogged.

After the break-in we were scrambling around to protect our identities because one of the laptops that was stolen had our recently completed taxes on them, as well as some other documents that were useable for stealing identities. We also had to clean up the mess they left behind, then the mess the police made trying to help catch the guy.

Adam had recently decided to leave working on his PhD full time and find a job. He was on an interview when the bastards broke in in February. A month later he was offered all three jobs that he interviewed for, and he accepted the place he was most excited about. I'm very happy to report that he loves his job and he can't imagine being anywhere else.  He can't believe that he's been there 6 months already.

In March I was selected to interview at a non-profit. At the end of March they offered me the job and I accepted. It is a great job, a new position, and I love it. It's a very small office but we are doing good work. I've been there for 5 months and I can't believe it either! We're doing a lot of exciting things and hopefully there will be room for even more expansion soon!

Around the same time however, we learned some bad news. My Dad had been diagnosed with cancer. Cancer sucks. They caught it very early and he's going to be fine. At his last check he was cancer free. So, he's been cancer free for close to four months now.

Once Adam accepted the offer for his job, we started looking for a house.  We found one, made an offer, then another, the second offer was accepted and after many issues with our loan officer being incompetent, we closed on a single story ranch house with a full basement in a suburb of Lansing on Adam's birthday. It is a fantastic house and we love living here. How we moved in was very complicated, because we had planned to stay out our lease at our rental house on Lansing's east side.

And then it was burglarized again.

The second burglary happened the Monday after Adam's birthday, which also was the Monday after we closed on the house.  We didn't spend another night in the house. We stayed with some friends in East Lansing for two weeks, and moved out the Saturday after the second break-in, and into a storage unit and into the sun room of our new house. The former owners were kind enough to let us move a bunch of our stuff into the sun room while they were still living here.  After two weeks with our friends, we decided we didn't want to impose on our friends for too long, because we weren't sure when we'd be able to get into the new house. So we moved into a dog friendly hotel near our new house for two weeks.

Thanks to my father-in-law, we had installed a security camera system after the first break-in and were able to give the footage to the police which aided them in catching the kid who broke in. I can't say anything else because the court case is still in progress.

It was a very stressful time in our lives and we are glad to be past it.

We've been living here for four months and I think it's starting to sink in that we get to be here, that this place is ours (and the credit union's) and we just can't believe it. We are close to being done with furnishing the house, and there are curtains and shelves up and as many candles as I can get in!


Unfortunately, during this time, I also learned that a childhood friend was losing her second battle with cancer. This has been incredibly hard on her, her family and friends and I am kind of in shock. You don't expect to lose friends when you're 25. I hope that she beats this thing every day, but I cry a lot about it too, when I'm not in numb shock. Cancer really sucks.

That pretty much sums up the highs and lows of the last 6-ish months. I am hoping to get back on a regular schedule of blogging, but it won't be 5 days a week. I also have to fix how this blog looks in Chrome on Mac, because it looks funky.

Hug your loved ones, and tell them you care.

Here's a cute picture of Tesla. 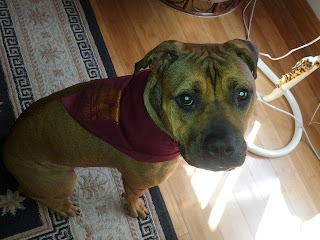